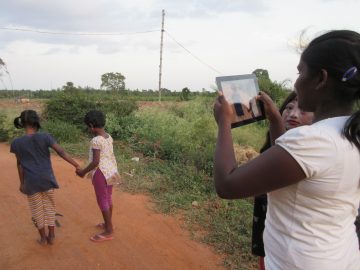 In this session Dr Theo Bryer and Prof Andrew Burn will share some of the films they have made as aspects of the research projects that they have engaged in. They will reflect on the questions raised by this approach related to possibilities and limitations associated with: representation and ethical concerns; editing as a form of analysis; viewing or sharing as a means of opening up dialogue about research findings; the academic status of these artefacts and skills, technology and support.

Dr Theo Bryer is currently joint Programme Leader for the MA in English Education and tutor on the English with Drama PGCE at UCL IOE. Theo joined the IOE part-time to teach on the English with Drama PGCE, around ten years ago, while still teaching in school and having taught Drama (mostly) for over twenty years in schools and colleges in Birmingham and London. Theo was also involved in Theatre in Education, youth theatre and projects involving young people who were newly arrived in South London schools. Theo has received Arts Council funding for some of these projects and experimented with media production alongside improvisational drama. These activities informed on-going research interests.

Dr Andrew Burn is Professor of English, Media and Drama, and director of the DARE centre (Digital | Arts | Research | Education), a research collaboration with the British Film Institute. Visit the DARE website  – www.darecollaborative.net – for information about events and projects, and links to people and partners. He is also director of MAGiCAL projects, an enterprise developing game-based software for education, in particular the game-authoring tool Missionmaker which features in several of his research projects. Andrew has published work on many aspects of the media, including media literacy in schools, the semiotics of the moving image and computer games, and young people’s production of digital animation, film and computer games. He has conducted a wide range of research project over many years, funded by, among others, the AHRC, the European Commission, the ESRC and the EPSRC. Visit his personal website for more information about projects, publications and interests: www.andrewburn.org. He is interested in the study of popular culture, especially as it relates to play, the arts and education. Methodologically, he has adapted theories of multimodality to describe and analyse media texts, relating them to them to to the Cultural Studies research tradition. He has previously taught English, Drama and Media Studies in comprehensive schools for over twenty years. He has been a Head of English and an Assistant Principal at his last school, Parkside Community College in Cambridge, where his main role was to direct the school’s media arts specialism: it was the first specialist Media Arts College in the country.

The Practice As Research network with its resources is free and always will be, but it does of course incur costs to run and to keep it running. If you use it and benefit, enjoy it and would like to keep it going, please, consider leaving something in the tip jar. Thank you!